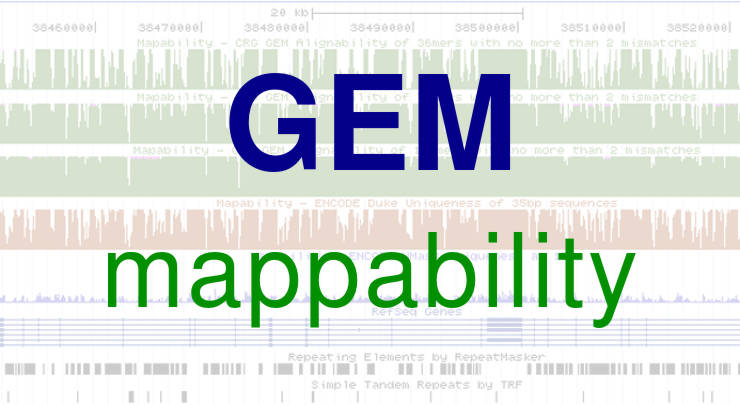 This post will guide you on how to get GEM mappability and convert it to BED file. Links to GEM library and all necessary conversion scripts are provided.

GEM mappability was the most popular program to estimate genome mappability a few years ago. However, a lot of things have changed since that time. Not only published tutorials don’t work anymore, but even finding GEM with the mappability option is not that easy.

The link in the original paper doesn’t work anymore. Moreover, if you google GEM mappability, you will find out that mappability was removed from GEM. I faced these and some other issues when I tried to get a mappability track for my data with GEM. Therefore, I would like to share scripts and commands I used to get GEM mappability in 2019.

As I mentioned before, the mappability option has been removed from GEM. This removal was intended to be temporarily in 2018. But mappability is still not there in the mid-2019. So, downloading GEM 3 from its Github page won’t help you. Luckily, previous versions are still available at Sourceforge.net. I downloaded GEM-binaries-Linux-x86_64-core_i3-20130406-045632.tbz2.

Extract the downloaded archive and make all files in the bin folder executable. You GEM library is ready!

To get mappability in GEM format run these commands:

GEM mappability file may not be suitable input for many programs. For example, GATK takes mappability data in a BED file. BED files are also easy to convert to many other formats.

I found this Github repository that shows how to convert GEM mappability to BED format:

In these commands: gem-2-wig is part of the GEM library. wigToBigWig and bigWigToBedGraph can be downloaded from here. bedGraphTobed is available in the same Github repository.

Some programs including GATK require overlapping mappability intervals to be merged. You can achieve that with my python script:

where -v defines the overhang size between intervals.

Since I mentioned GATK many times across this post, I also add these two commands to compress and index mappability data for GATK:

I believe GEM estimation of genome mappability is still valid in 2019. Finding the correct version of GEM and a few other scripts was not straightforward, but otherwise this approach is fast and simple. Luckily, you do not need to do all the work I have done :-)

If you want to use some of the latest approaches for mappability estimation, try Umap and Bismap. Also, keep checking the latest version of GEM, maybe it already has the mappability option at the time you are reading this post.