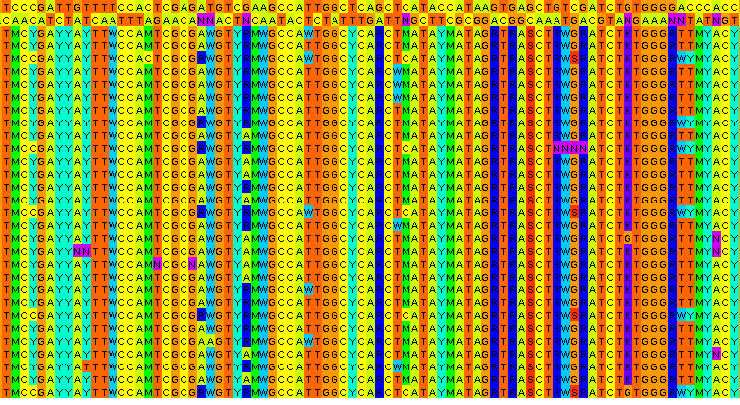 Heterozygotes as ambiguity characters. Mistakes you don’t want to make

The problem is that most software would use such heterozygous genotypes as uncertainty. This problem is very obvious but according to my experience, it frequently stays unnoticed. Let me elaborate little more below,

The current nucleic acid notation appeared a long time before the next-generation sequencing and whole genome data analyses. Characters A, C, G, and T were introduced to represent the four nucleotides of a DNA molecule. Ambiguity characters W, S, M, K, R, Y were proposed to code positions when there is some uncertainty between two nucleotides and B, D, H, V were used when there is only confidence that a position is not one of the four nucleotides. This coding system is known as the IUPAC nucleotide code.

It worked well in the early DNA sequencing era when scientist studied short haploid DNA sequences, and there is still no alternative today. All software uses this coding system. 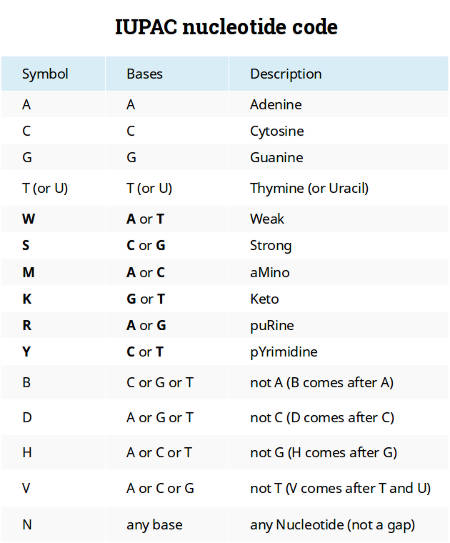 With the advent of next-generation sequencing when we started to work with genome-wide data of different ploidy, the same IUPAC coding system became being used in a little different way than it was originally designed. Many scientists, including myself, use ambiguity characters to code heterozygote sites in diploid organisms, e.g. the heterozygote A/T would be presented as W.

This is a convenient way to code because it allows keeping only one sequence per individual. This coding system also seems to be a reasonable way to make an input file for many software packages using formats like FASTA. Personally, I like to use the tab-delimited table format with the one-character code as shown below. 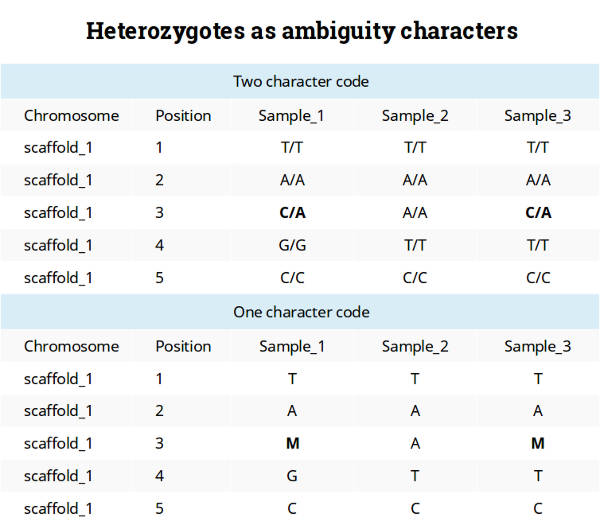 Heterozygotes as ambiguity characters may bias your analyses!

However, while it is known for sure that ambiguity characters in the data stand for two particular nucleotides and NOT for uncertainty, many software packages have been designed to analyze haploid sequences, and they would treat these heterozygote characters as ambiguity. Often such sites are just dropped out by a program.

This may introduce a substantial bias in such estimation as nucleotide diversity, absolute divergence and related population genetic statistics (e.g. Tajima's D). Heterozygotes as ambiguity characters may also affect branch lengths of a phylogenetic tree. The effect can be especially dramatic if there is a high level of heterozygosity in the data.

By nucleotide diversity (know as π) I mean average pairwise differences per site between all samples representing one population.  Absolute divergence (known as Dxy) is a similar estimate, but it is based on pairwise differences between representatives of different populations. Thus, they are similar estimates, but the former compares samples within groups, and the latter does it between groups. 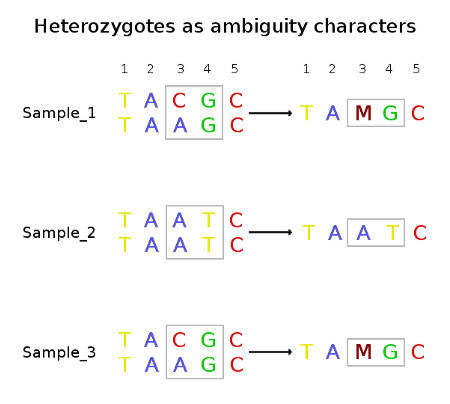 If we calculate Dxy between these three individuals, we obtain the following values:

The nucleotide diversity of this sample is just a mean of all pairwise differences between these six sequences, and it equals ~0.213.

Now let's have a look at the right part of the image, where heterozygous genotypes are coded as ambiguity characters. If a program discarded sites with ambiguity characters (position 3) and treated these data as haploid, it would analyze these data as there were only three sequences with four nucleotides and it would only find the difference at position 4. The divergence would be the following:

The nucleotide diversity would be estimated as ~0.167, and it would be around 22% lower than the true value.

Branch lengths of a phylogenetic tree

As far as I know, all phylogenetic programs usually do not use ambiguity characters as heterozygotes because there is yet no proper model to do so. So, depending on the distribution of heterozygosity in your data, this may have a substantial effect or may have no influence.

In my Master's thesis (see Publications), I did a phylogenetic analysis of Heliconius butterflies, and I observed that one of the species had a long branch length. However, when I pseudo-phased the data by random assignment of one of the alleles from heterozygous genotypes and thus allowed a phylogenetic program to use the information previously masked in the heterozygous sites, the branch length of this species was not that long anymore.

You can see that the branch length of H. pardalinus sergestus (blue) is substantially longer in non-phased data, where all heterozygotes are coded by ambiguity characters while in the pseudo-phased data, the length of H. pardalinus sergestus branch is even shorter than in the other taxa. Besides, you probably have also noticed that introducing heterozygous sites into the analysis substantially increased the relative length of the terminal branches. This is due to the elevation of genetic diversity unmasked by pseudo-phasing.

Unfortunately, I cannot provide an extensive list of software which can or cannot use ambiguity characters as heterozygotes. Maybe I will make such a list later. For this post, I have only looked at the programs listed on the Wikipedia page about nucleotide diversity.

I recommend to always check the performance of a program you are going to use. If a program does not recognize ambiguity characters as heterozygotes, you can pseudo-phase heterozygous genotypes and analyze sequences as haploids. I will explain how to do the pseudo-phasing in my next posts.

I would like to say that, of course, there is software designed specifically to analyze genomic data in the VCF format (e.g. VCFtools) where genotypes are presented by two or more alleles. But people often convert VCF files to some other formats and use ambiguity characters to code heterozygous genotypes and this may lead to the biases I describe.

Personally, I use custom python scripts to estimate π, Dxy, and other population genetic statistics, but this is a topic for another post.